BBC: Moving to the rhythm ‘can help language skills’

Moving in time to a steady beat is closely linked to better language skills, a study suggests.

The researchers suggest that practising music could improve other skills, particularly reading.

In the Journal of Neuroscience, the authors argue that rhythm is an integral part of language.

“We know that moving to a steady beat is a fundamental skill not only for music performance but one that has been linked to language skills,” said Nina Kraus, of the Auditory Neuroscience Laboratory at Northwestern University in Illinois.

More than 100 teenagers were asked to tap their fingers along to a beat. Their accuracy was measured by how closely their responses matched the timing of a metronome.

Next, in order to understand the biological basis of rhythmic ability, the team also measured the brainwaves of their participants with electrodes, a technique called electroencephalography. This was to observe the electrical activity in the brain in response to sound. 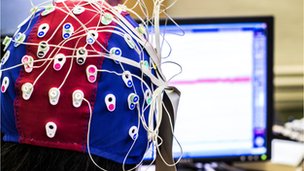 Those with musical training had enhanced brain responses to speech sounds

Using this biological approach, the researchers found that those who had better musical training also had enhanced neural responses to speech sounds. In poorer readers this response was diminished.

“It turns out that kids who are poor readers have a lot of difficulty doing this motor task and following the beat. In both speech and music, rhythm provides a temporal map with signposts to the most likely locations of meaningful input,” Prof Kraus told BBC News.

The brainwaves recorded matched the soundwaves, she said. “You can even take the recorded brainwave and play it back through your speaker and it will sound like the soundwave.

“It seems that the same ingredients that are important for reading are strengthened with musical experience. Musicians have highly consistent auditory-neural responses.

“It may be that musical training – with its emphasis on rhythmic skills – can exercise the auditory-system, leading to less neural jitter and stronger sound-to-meaning associations that are so essential for learning to read,” added Prof Kraus

John Iversen of the University of California in San Diego studies how the brain processes music. He was not involved with the research but agreed that musical training could have important impacts on the brain.

“This study adds another piece to the puzzle in the emerging story suggesting that musical-rhythmic abilities are correlated with improved performance in non-music areas, particularly language,” he said.