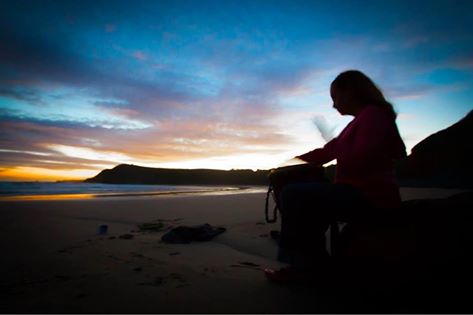 “When I drum I connect to my soul…deeply, instantly. Drumming moves me so richly and grounds me when I have scattered energies.
It soothes, calms,and brings an inner joy and serenity. Drumming connects people so easily as it is a universal language, I love the way it connects strangers together.

I started drumming when I was 3. Even though I didn’t have a drum, I would just sit in my mum’s big lounge chair and drum like a wild child with my hands on the arms of the chair. I guess I was lucky to grow up to the sounds of Led Zeppelin, Santana, Eric Clapton and the Beatles etc.

I was surrounded by varied brilliant artists with their own unique drumming styles, This rich musical environment influenced me strongly at a young age. Drumming along to all those cool songs felt so good all through my growing up.

I was introduced to African Drumming in Western Australia in about 1994. A lot of my friends in Fremantle had been to Ghana and came back to teach songs from all over West Africa. After a few sessions I ordered my own djembe and had weekly lessons, African dancing was a huge part of the musical community scene in Freo too. There were so many awesome community drum and dance gatherings. Having my own djembe to practice on was amazing after years of playing on bench tops or my knees!

In 2002 I moved back home to Melbourne and for a year had no tribe to play with and I missed it! By destiny in 2003 I heard a new tribe drumming in Aireys Inlet Camp….Simon and his crew. Now after having gone to Ghana in 2008, I teach beginners drumming myself…A little Phillip Island group called Island grooves. We hope to present some arrangements at the next Tribalism.

I know I’ll drum to the day I die….it brings me so much joy and adds a shine to my soul.I really think music makes the world go round”